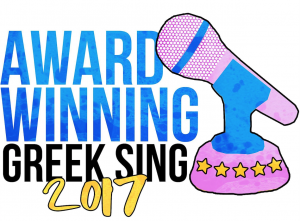 Greek Sing is an annual event for fraternities and sororities to showcase their talents through music and performance, build community among their organizations, and have fun! The primary purpose of Greek Sing is to raise money for the Gayle Beyer’s Scholarship fund, founded in 1985 and named after a woman who demonstrated great dedication and true allegiance to the Greek community as a collegian and Greek advisor. Each year, a scholarship is given to a Panhellenic woman who demonstrates commitment and excellence to the Penn State Panhellenic Council. Greek Sing’s 2017 theme was Award Winning Greek Sing!