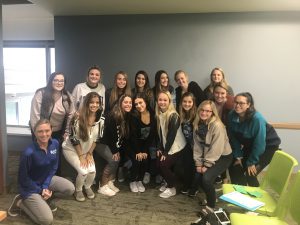 What is Junior Panhellenic?

“I was on the 2018 Junior Panhellenic board and it was one of the best experiences I have had being apart of Greek life at Penn State. I was able to learn so much more about how to empower the women in the Greek life community as well as meet so many amazing women from other chapters. I was so thankful for this experience and would highly recommend to anyone thinking of applying,”
– Megan Eppley, Alpha Omicron Pi

“Junior Panhellenic gave me an opportunity to meet driven women outside of Delta Gamma. I got to learn more about the Panhellenic Council & best of all I made friends I still talk to in other chapters,” – Daniella Torres, Delta Gamma