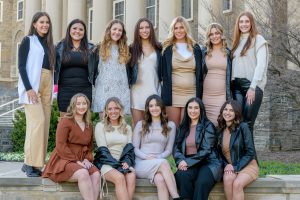 Mission: The mission of the Pennsylvania State University Panhellenic Council is to provide leadership, sisterhood, scholarship, and service to the Penn State Greek community as well as the community at large in order to aid in the personal growth of Nittany Lion women.

Who we are: The Penn State Panhellenic Council is the governing body for Penn State’s 20 inter/national sorority chapters. With such a large Greek system at Penn State, the Panhellenic Council (sometimes abbreviated “PHC” or “Panhellenic”) unifies and oversees the chapters and serves as their collective link to the campus and surrounding communities.

Penn State has one of the largest sorority systems in the country, with 17 National Panhellenic Conference chapters and 3 associate chapters.

STATEMENT OF RELATIONSHIP
Fraternity and sorority organizations at The Pennsylvania State University, identified in this document, are considered private, independent, self-governing, and social entities that freely associate and determine their own membership.  The four governing councils at Penn State, i.e., the Interfraternity Council (IFC), the Panhellenic Association (PA), the Multicultural Greek-letter Council (MGC), and the National Pan-Hellenic Council (NPHC) are responsible for establishing policies and procedures under which their member organizations are expected to follow.